If you wish to attend one of our occasional open events, you must pre-book a place.
Click on the host organisation's name to be 'spirited away' to their website!
​
​
2022

Sorry, but there are currently no open PI events scheduled.​

If you would like to run an investigation at Moot Hall, our curator Clive Arnold
will be happy to facilitate that.  He will make you very welcome;

​For an information sheet, contact Clive - stating whether yours would be a Private or a Commercial event - so that he can send you the correct information.
​

Here you will find, in descending date order, photographs, videos and reports of just some of the strange things that have happened to Moot Hall staff and to PIs during paranormal investigations.

3rd December 2021
One of the members of a small PI group was sat upstairs in Moot's main hall, with her new camera standing on the big central table, the lens facing toward the stairwell.  She was taking random pictures, to see how well the camera would perform in very low light levels.  There was no person, nor any physical object between the camera and the chairs at the side of the stairwell. Yet one image she captured appeared to have a large dark shadow in it - despite there not being enough light to cast such a shadow. The image was enhanced to heighten the contrast and shows what looks like the silhouette of a seated figure, possibly hooded and gowned, facing left.
This picture has been examined by a photographic specialist who ruled out any camera effect but who could offer no explanation for this shape appearing in the picture.
We think it looks rather like a nun in silhouette - take a look and see what you think. 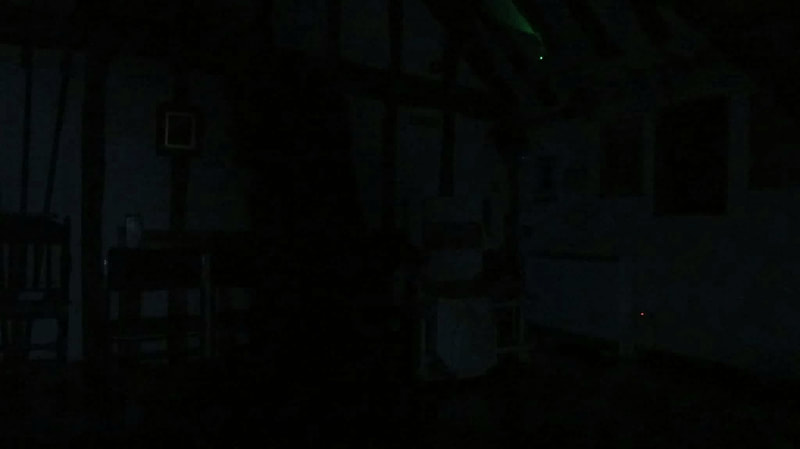 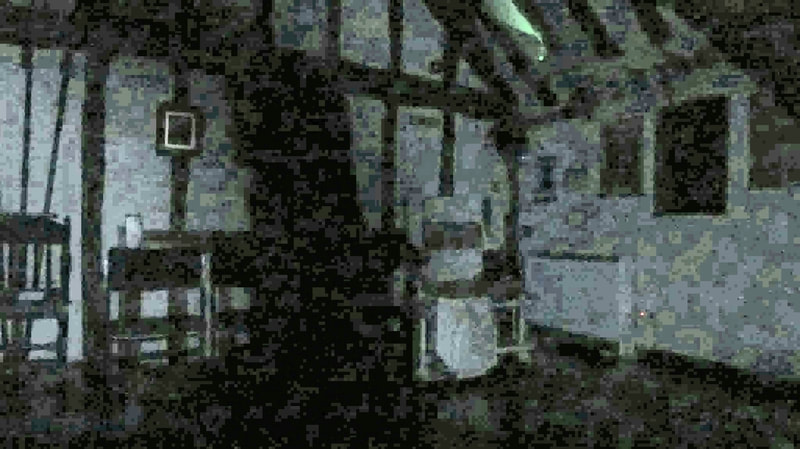 13th August 2021
​19th October 2019. Members of the PI group Beyond This World returned to see if they could again capture infra-red images of the boy Thomas.  The month before, the camera's file had simply vanished so, this time, they videoed and photographed what appeared on the infra-red camera's screen onto multiple phones.

Having sensed the boy was present, they positioned one investigator near the west end of the hall and asked the 'spirit' boy to stand near that person. Then they set their 'Stick-man' infra-red camera running. (This device can detect heat sources in the dark and, in the case of the heat source being vaguely human-shaped, the device has software that tries to overlay a stick figure so as to aid detection of such figures and to show any movements such figures may make.)
The following pictures and video of the camera screen show what it was picking up at 1207am. The PI is visible in the first photo and, standing next to and somewhat behind, is a child-sized figure. There were no live children, nor any very small adults present at this investigation!   Pictures and video are by kind permission of the members of Beyond This World  ©
​21st September 2019.  Members of PI group Beyond This World made a video, of a child who identified himself as 'Thomas', jigging about on top of the large table in the upstairs hall. They used an infra-red camera equipped with software which assists the viewer to identify human shapes and movements by overlaying a 'stick man' type figure onto the infra-red image.   The film of this boy was shown to Moot Hall's curator during the debrief at the end of the evening and the owner of the camera promised to email us a copy. But, when the owner of the camera went to he review the film the next day, the file was gone! The group decided to return a month later and try again. (See above report.)
9th March 2019.  During a paranormal Investigation by the 'Paranormal Sisters' group, some incredible images were recorded, in Moot Hall's Exhibition room - at 22.09pm, a short video clip. was filmed. (This can be downloaded from the link immediately below this text.)
In the first few seconds of this video, a figure appears to move from right to left, dodging behind the upright stud timber (in the centre of the picture) toward the Bunyan Pulpit. The film is somewhat dark, as the only lights on at the time were the investigators' torches, but there is clearly something, about the height of a man, that moves from right to left and a head shape moves across a white notice on the puplpit, suggesting that the figure was about six feet tall.

The figure was not seen live by the investigators - they only saw it when reviewing the video a few minutes later.  They then took screenshots from that video.  These show a figure - shadowy but pretty distinct - standing between the Bunyan Pulpit and one of the vertical timbers dividing that bay from the bay in which the photographers were standing.
In those screenshots (below) the image on the left is taken from the video and timed at 22.12pm.  The centre picture is a slightly enhanced version and, on the right, a picture taken in daylight, from the same position, in order to show the location more clearly. In the first two pictures, what looks like the head of a human figure fully obscures the bottom third of the white notice on the Bunyan pulpit, enabling us to estimate the height of that figure at about 5'6" tall.

The investigators were certain that the figure was not one of their group because, at this time, half their members were engaged in a vigil in the cellar below Moot Hall, whilst the rest of the investigators were standing behind the photographer. Neither could any outsider have entered the building without the investigators knowing, because there is an alarm on the main entrance door of the building.  Plus, the figure in the film emerges from the right, where there is only an outside wall and external door - which is nailed shut! 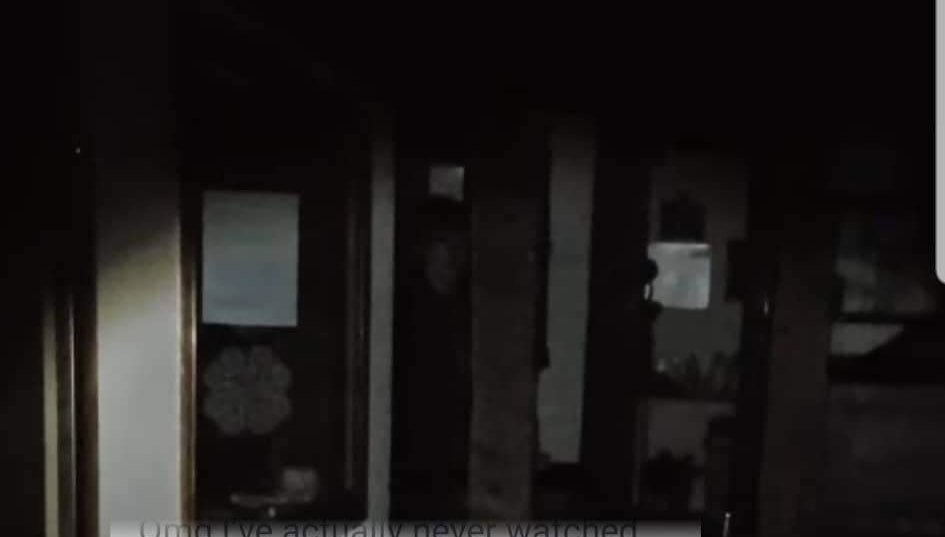 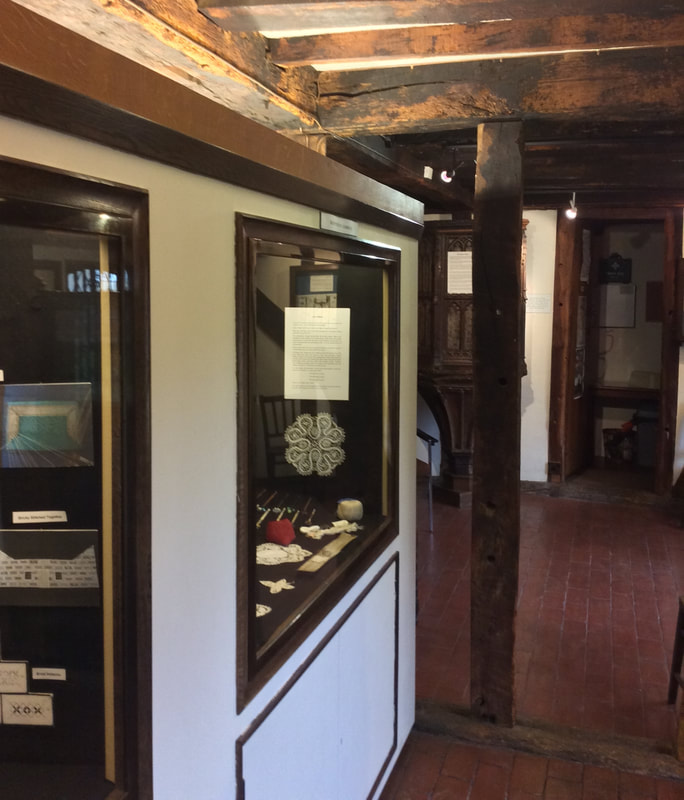 The door between reception and the exhibition room has been the site of many strange occurances - download the Word document to read a full account.
The photographs, below, show the door ajar, its pneumatic closer and the heavy steel drop-latch.